Employed as a research assistant for the summer, much of my time was spent in the Salvation Army Heritage Centre in Denmark Hill searching through late Victorian and Edwardian copies of The War Cry. For those of you who follow me on twitter, you will have seen the range of items reported upon in this rather abundant resource – from cookery tips to illustrations of slum life. One regular feature that caught my attention was “Cellar, Gutter, and Garrett,” reporting on the work done by the Salvation Army in London’s poorest districts. The particular article I want to discuss in today’s post, is one reported in April 1885 which tells the tale of a ‘widower, seventy-six years of age, feeble and sick’ who ‘lived alone for six long and weary years…in a barely furnished and dirty room in Seven Dials’.

To reach him we had to climb some winding, creaking stairs, then, opening the door, we found him in his usual position before the fire–a scanty one its true. He had sat there for six years–cannot go to bed or lie down, because of his breathing; he was very thin, and as the clothes were still thinner, and in some places worn away, we could see how the bones stood prominently out, he had no shoes or stockings on, his feet rested on the cold hearth–he had on his head a hat, or rather the rim of one, the crown having been burnt out, by it accidentally falling onto the fire as he slept. 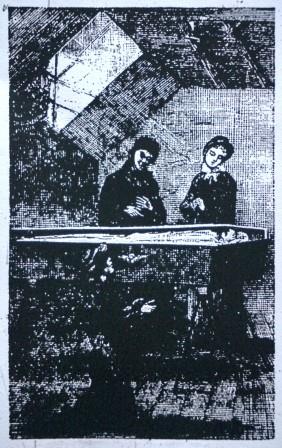 His health further declining, however, he was ‘induced’ to lie down on the bed, soon thereafter passing away peacefully.

Yet, despite the inference of a lonely death in the article’s subheading, as we go further into the story it reveals that in his final days he was tended to by the Salvation Army “lasses.”

On Saturday morning the lasses visited and washed him, tidied his room, talked and prayed with him…

Moreover, his daughter, ‘who occupied the floor beneath’ and was ‘equally poor, with a large family’, would bring him ‘a little food’. When her father’s health rapidly declined, it was she who called for the doctor.

We knelt and prayed in the darkened room beside the corpse and his daughter (the mother of three little children) promised God and us to meet him in Heaven.

This particular article resonated with me because of its similarity to a number of coroners’ inquests I came across during my PhD research relating to elderly widowers residing alone, who were–from the evidence given–far from alone. Despite living alone, these elderly widowed men frequently had around them support networks that they could rely upon both day-to-day and in times of crisis. The most predominant of these were female family members—daughters, sisters, and even mother-in-laws. Such networks, often untraceable in the census due to differing surnames, are opened up by the Victorian coroner’s courts. At one Ipswich inquest held in 1896 on the body of widower, Henry Peck, who had died as a result of a fall, the court recorded that it was his sister, ‘Tamar Balaam’, residing on a neighbouring street, who had noticed that her brother’s ‘shutters…were closed beyond the usual hour’ and, being concerned, had her husband break down the door. The Ipswich Journal reporting on the inquest peculiarly decided on the tagline of ‘A Lonely Man’s End’, but like the case reported in The War Cry, it is evident that while these widowed men were living alone they were not necessarily ‘lonely’ men.

Please do not reproduce the content of this blog in print or any other media without permission of the author.